Toronto’s transit operator TTC announces that it is operating the largest fleet of electric buses in North America. The milestone comes as the TTC’s third new electric bus model is now road ready and starting to go into service. Today 35 e-buses are in operation, out of 60 globally ordered. The remaining 25 are waited by the end of September.

Recalling the building process of this 60 e-buses fleet, the beginning of the project dates back to November 2017, when the TTC Board approved procurement of 30 all-electric vehicles. In June 2018, the Board approved the purchase of 30 more. The TTC acquired the 60 all-electric buses from three manufacturers: BYD, New Flyer and Proterra (that received in Toronto its first order from Canada). 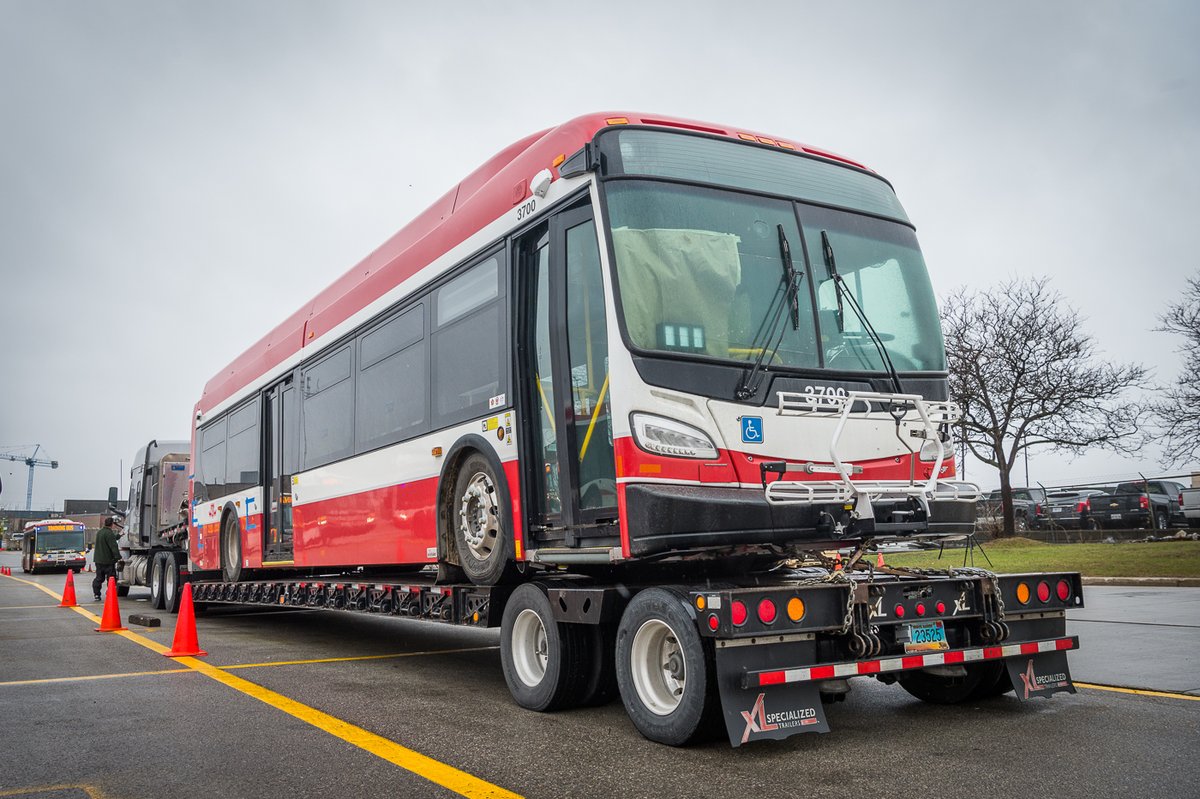 The TTC’s Arrow Road Garage was the first location to be outfitted with leading-edge charging infrastructure for its New Flyer Industries vehicles, TTC explains. Mount Dennis Garage followed with vehicles made by Proterra that use the same charging technology. BYD vehicles, which have now all arrived on property and are based out of the TTC’s Eglinton Bus Division, require a different type of charging infrastructure. While the other e-buses use DC or Direct Current electricity to charge, BYD vehicles use AC or Alternating Current.

The differences between all three e-bus models, including the effect of how they charge on overall performance, will be put to the test as the TTC progresses with its head-to-head comparison to inform future procurements of battery-electric buses.

Approximately 35 e-buses are already in service across the city. The first BYD-manufactured eBus was put into service on the 116 Morningside route a few days ago. The remaining 25 e-buses, currently undergoing final testing and commissioning activities, are expected to be in service by the end of September.

What is worth mentioning, BYD e-buses are the first to hit the road from BYD’s 45,000-square-foot assembly facility in Newmarket, Ontario. The assembly of these buses created 30 jobs and are the first buses built in Ontario since Orion closed its plant in 2012.

The electrification of vehicles is a key component of the City’s TransformTO climate action strategy, which targets an 80-per-cent reduction in local greenhouse gas emissions by 2050. To meet that target, 100 per cent of vehicles in Toronto must transition to low-carbon energy by 2050. The electrification of buses, which is targeted for 2040, demonstrates the City’s commitment to lead by example. Vehicles generate about one-third of the emissions in Toronto today. The TTC’s new eBuses operate on truly green propulsion technology with zero tailpipe emissions.

The Government of Canada and the City of Toronto have invested $140 million in this project under federal Public Transit Infrastructure Fund (PTIF). The money is being used for these electric buses and to begin laying the infrastructure for future expansion of the TTC’s zero-emissions fleet. This fund is helping keep Torontonians moving through investments in the repair, modernization and expansion of the city’s transit and active transportation networks. In total, up to $1.8 billion is being invested in Toronto through PTIF, which was launched on Aug. 23, 2016.

“Public transit allows Canadians to get around in cheaper, cleaner and faster ways,” said The Honourable Catherine McKenna, Minister of Infrastructure and Communities. “Our government’s investment in the TTC’s electric bus pilot program is a sign of our commitment to made-in-Canada clean technology and an important step toward our target of 5,000 electric buses in Canada’s fleets over the next five years. Canada’s Infrastructure plan invests in thousands of projects, creates jobs across the country and builds stronger communities.”

“I’m proud to help launch these new electric buses and to celebrate the fact that Toronto is now officially operating the largest fleet of electric buses in North America. This fleet of 60 all-electric buses was only made possible thanks to an investment by the City of Toronto and the Government of Canada of $140 million,” said Toronto Mayor John Tory. “Our e-bus fleet is one of the many projects that our City government has jointly funded with the federal government through the federal Public Transit Infrastructure Fund. I want to thank the Government of Canada for providing this funding that helps keep Toronto residents moving by investing in modernizing, expanding and upgrading our transit and transportation infrastructure. This is the right and responsible thing to do for our transit system, our city, and our environment.”

“Electrification is the future of public transit and I’m proud that the TTC has been established as an industry leader in this regard, as the owner of North America’s largest fleet of eBuses,” said TTC Chair Jaye Robinson. “The TTC Board wholeheartedly supports the TTC’s forward-thinking plan to achieve a zero-emissions fleet by 2040.”

“The TTC is pleased to be leading the charge on such an important project and transition for the transit industry and the city,” said TTC CEO Rick Leary. “We’re grateful for the ongoing support from our partners at the City and at Infrastructure Canada to sustain our pledge to prioritize network-wide service improvements and ensure the TTC provides the reliable service that our customers deserve.”