Ballard Power Systems announced that it has received follow-on purchase orders for 15 of its 85-kilowatt heavy-duty FCveloCity-HD fuel cell modules from Wrightbus. The Northern Ireland based bus manufacturer was recently re-capitalized by Bamford Bus Company, after having gone into administration last year.

Ballard currently says it has orders in-hand from multiple bus OEMs – including Wrightbus – for a total of 127 fuel cell modules to power FCEBs in at least 7 cities in the U.K., Germany, Italy and the Netherlands, all under the Joint Initiative For Hydrogen Vehicles Across Europe (JIVE) program funded by FCH-JU. 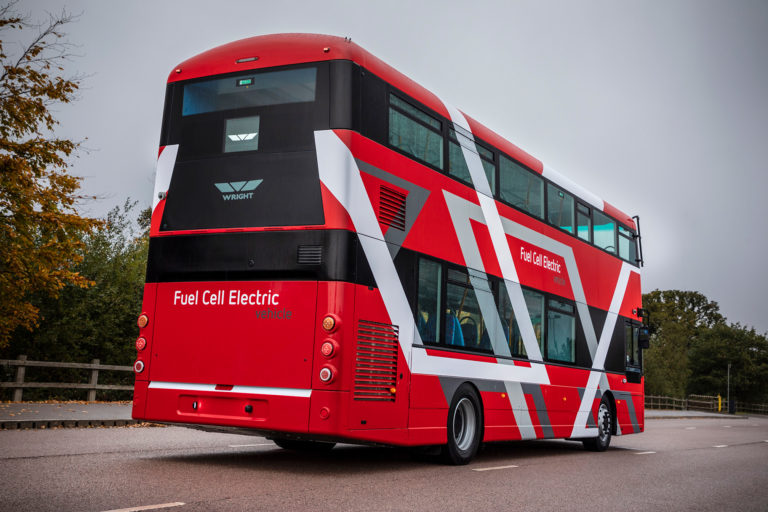 Ballard modules to be shipped in 2020 to Wrightbus

Including the 15 modules announced today, Ballard currently has orders in-hand from Wrightbus for a total of 50 modules to power FCEBs in the U.K., 35 of which were previously announced in 2019. Of those 35 modules, 20 are to power buses planned for deployment in London following an order in May 2019 and 15 are for buses planned for deployment in Aberdeen. Ballard expects to ship all 50 modules in 2020, the Canadian company points out.

Earlier this year the U.K. Government’s Department for Transport (DfT) announced a 5-year, £5 billion (US$6.4 billion) plan to enhance bus and bicycle infrastructure in the country, together with deployment of at least 4,000 zero-emission buses, with further details expected in a National Bus Strategy to be published later in 2020.

Ballard, Wrightbus and Ryse Hydrogen – also a Bamford-owned business – are founding members of the H2Bus Consortium, announced in June 2019 and focused on deployment of at least 1,000 zero-emission fuel cell electric buses and related infrastructure in European cities at commercially competitive rates. Ryse Hydrogen’s is working toward the creation of a green hydrogen ecosystem for the production, distribution and dispensing of clean hydrogen fuel.

Jo Bamford, Owner of Wrightbus said, “Cities around the world are seeing massive reductions in air pollution as many vehicles have been kept off the road during the pandemic. However, the reality is that if we just go back to how public transport has traditionally been run, levels of pollution will quickly rise again to the same levels as before the crisis. We have an opportunity, working with Ballard’s leading-edge technology, to build hydrogen powered buses that will make a huge difference to air quality, as well as generating U.K. jobs. Therefore, our organization is strongly encouraging DfT to provide funding support for the deployment of 3,000 fuel Cell Electric Buses, as part of the U.K.’s National Bus Strategy”. In this same regard, Jo Bamford recently said he has plans for the rollout of no less than 3,000 hydrogen buses in the UK by 2024, all built in Ballymena.

Ballard: proud to be working with Wrightbus

Randy MacEwen, Ballard CEO noted, “We are proud to be working with Wrightbus, a leading industry champion for Fuel Cell Electric Buses on U.K. roads. These buses will meet a number of important requirements – including extended range and rapid refueling – in addition to being highly beneficial from an environmental perspective. The bold plan from the U.K.’s Department for Transport represents a significant leading edge of the anticipated rapid growth in zero-emission fuel cell-powered buses as we move forward in Europe.”