Zaragoza (Spain) will have a Solaris Urbino 12 Electric on a trial over some weeks. The line tests will be carried out by the local carrier Avanza Zaragoza. One out of three buses sold by Solaris in 2018 were alternative drive vehicles. During last year, 107 Solaris battery electric buses were delivered by the Spanish manufacturer, taken over by CAF group. 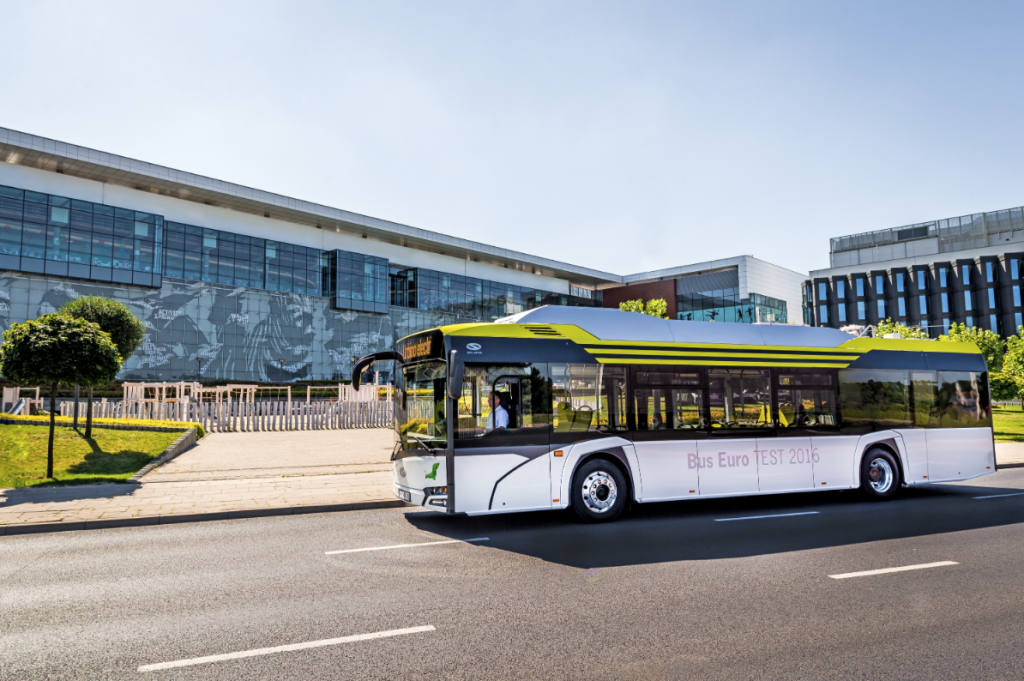 A Spanish trial for Solaris

The bus delivered to Spain is the vehicle which was positively evaluated by a jury of editors from 20 countries in the Bus of the Year 2017 contest. An edition that saw the victory, for the first time, of an electric bus. The Polish producer has equipped the vehicle with 240 kWh Solaris High Energy batteries. Two charging systems have been installed in the bus: one using a pantograph for charging during stopovers at bus stops, the other one using a plug-in for charging in the bus depot.

The operator Avanza Zaragoza will introduce it to serve the passengers on regular line in the coming weeks, allowing the city’s residents to get familiar with the vehicle’s advantages. Those include among others: an efficient air conditioning or an advanced passenger information and monitoring system, Solaris underlines in a press release. This Solaris Urbino 12 Electric features a driver’s touch panel consisting of 3 independent monitors.

Solaris’s experience in the field of electromobility is over 11 million kilometers covered by the battery-powered vehicles delivered to customers in 16 European countries and 38 cities. They can be found both in the far north of the continent, such as Olso in Norway or Finnish Tampere, as well as in sunny Barcelona. Since the delivery of the first zero-emission battery vehicle to the customer in 2013, the company from Bolechowo has delivered or contracted over 400 eco-friendly electric buses. Solaris will deliver as many as 30 electric buses to BVG Berlin, and a total of 8 zero emission buses to Hochbahn Hamburg. And Solaris is challenging Mercedes for the 250 electric bus tender in Milan. The results will be published soon.

One out of three buses sold by Solaris in 2018 were alternative drive vehicles. During last year, 107 Solaris battery electric buses were delivered to customers in Belgium, the Czech Republic, Spain, Germany, Norway, Poland, Romania, Slovakia, Sweden and Italy. The total of battery electric buses registered in Europe in 2018 is around 650.

According to the figures provided from the Polish manufacturer, Solaris ended the year 2018 with a market share of 17%, ranking second in the chart of electric bus manufacturers in European market, behind BYD (counting also the buses produced jointly with ADL). VDL, in the chart released by Solaris, places third.

On the other hand, according to the figures released by Interact Analysis, the 2018 market leader (after BYD – ADL) has been VDL. A segmentation, the latter, confirmed by Chatrou CME Solutions, which underlines that, with regards to registration in Western Europe and Poland, Solaris has registered 77 electric buses, for a market share of 13,7 per cent (behind BYD – ADL with 28% and VDL with 15,5%).

And 2019 will be the year of the Solaris Urbino 12 hydrogen and Trollino 24, that will be unveiled at UITP Public Transport Summit in Stockholm and Busworld Europe respectively.