The technology is (almost) ready, the regulatory frameworks not yet, the public not even. But the autonomous bus pilots are multiplying, and several manufacturers already announced autonomous bus fleets launch within a couple years from now. While short driverless shuttle buses operated in small private areas are not something new (we could mention, for instance, Navya and Easy Mile from the side of the industry), standard size autonomous buses are now approaching the launch moment.

A bus that can move electrically and independently, without driver on board, within the depot? It’s already here. Volvo Buses in November 2019 has held a live demonstration of a 7900 Electric city bus equipped for autonomous driving. 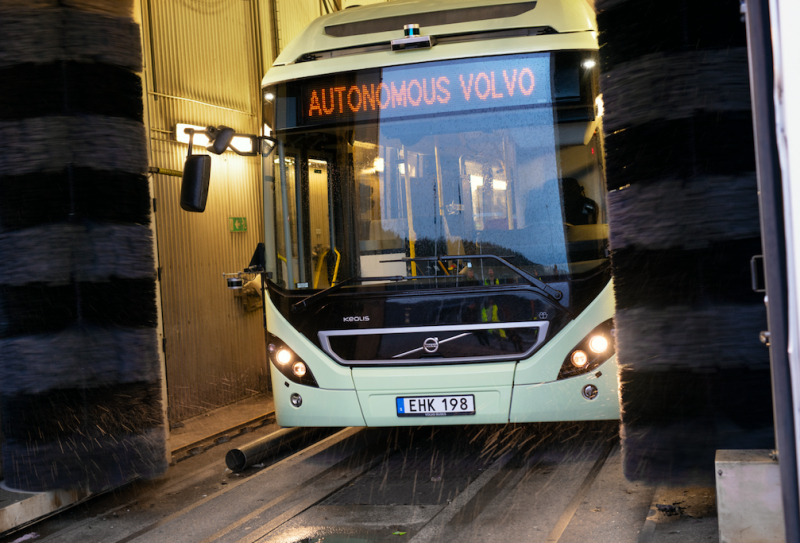 The demonstration took place in cooperation with Keolis in a depot just outside Gothenburg, in Sweden: the vehicle successfully moved between the parking lot and several workstations, including washing, maintenance and electric charging, before parking in the correct location, all with passengers on board.

The first driverless pilot in Singapore

Volvo Buses showcased its first autonomous bus concept in Singapore in March 2019. The vehicle, based on a Volvo 7900 electric bus modified for driverless operation, is the outcome of the cooperation between Volvo and Nanyang Technological University (NTU). The first demonstration took place indeed in Singapore. The Volvo bus will soon begin trials on the NTU campus.

The autonomous bus concept bus has been equipped with sensors and navigation controls that are managed by a comprehensive artificial intelligence (AI) system, Volvo pointed out in a press release. Previously, Volvo Buses had showed the driverless bus concept to a selected public in Sweden in June 2018, during the Volvo Ocean Race competition in Gothenburg (Sweden). 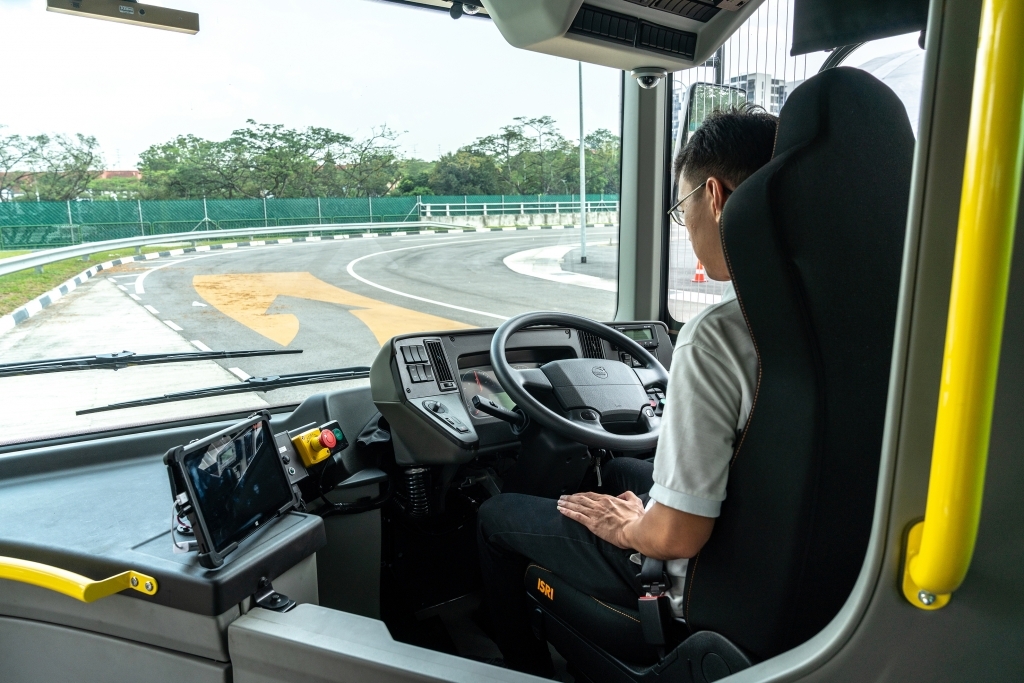 Scania autonomous buses are on their way

Remaining focuses on Swedish manufacturers, Scania announced a trial of autonomous buses on regular routes that will be carried out by Nobina in the Stockholm area with two vehicles starting from 2020. In the spotlight there will be the Citywide Electric, the first electric bus ever developed by Scania, that is completing a pilot period in Östersund (Sweden).

Nobina is the largest public transport operator in the Nordic countries. The autonomous bus trial with Scania will be conducted in two stages, initially without passengers before welcoming commuters onboard. Safety being a top priority throughout the trials, the buses will have a safety-driver to monitor operations and assist passengers (a common feature to all the autonomous bus pilots we are reporting about).

In the framework of the pilot, two Scania Citywide LF electric buses will connect the rapidly expanding new residential area Barkarby (where several innovative public transport projects are already under way, as BRT infrastructure and new digital solutions), approximately 20 kilometres from downtown Stockholm, with a nearby metro station. Charging operations will be executed in depot overnight.

It dates back to April 2018 the partnership between Scania and Haylion Technologies, a company committed in the development of solutions for the Chinese transport sector, with a focus on autonomous driving, electrification and connectivity. The two companies will work together in order to accelerate the commercialization of autonomous transport applications and the transition towards a sustainable transport system.

Since the end of 2017, Haylion Technologies has been testing autonomous buses on public roads with the Shenzhen Bus Group.

ADL and Stagecoach to perform and autonomous bus fleet in Scotland

We just wrote that Scania autonomous bus pilot is (reportedly) to begin in 2020. Well, in that same year, another project on autonomous buses is expected to be launched in Scotland, as announced by partners Alexander Dennis and Stagecoach. In this case, the vehicles deployed will be diesel buses. The project, supported by UK government with £4.35 million, will be based on the cooperation between several partners: Stagecoach and Transport Scotland, the manufacturer Alexander Dennis Limited and the technology company Fusion Processing.

Five driverless Enviro200 buses will carry people between Fife and Edinburgh through the Forth Road Bridge. The vehicles will be developed during the next year, the services will start from 2020, explain the companies involved. 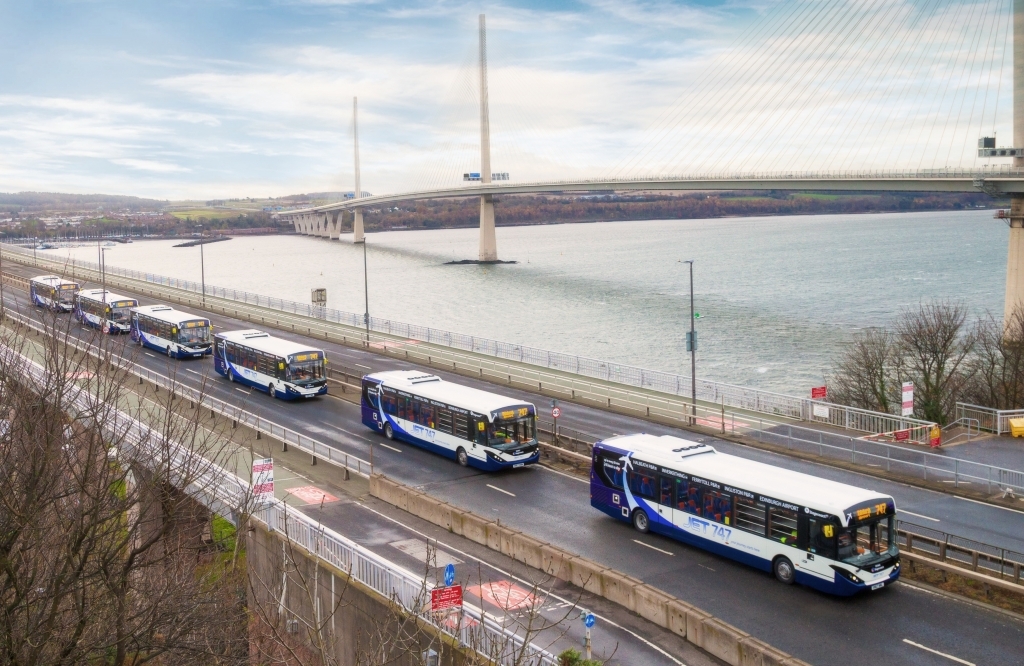 It is worth mentioning that the same network of partners already started to work jointly to experience autonomous bus operations in the depot, being the smart depot, where buses move in driveless mode for parking and being washed, one of the first kind of application of autonomous bus that could become reality.

Iveco autonomous bus, from the smart garage to the roads

Iveco and EasyMile to launch an autonomous bus in 2021

Iveco autonomous bus prototype is taking the floor in early 2021. It is being developed in the framework of STAR project and thanks to a wide range of partnerships between Iveco Bus and a group of companies and laboratories. The main partner is anyway EasyMile, a French company that already developed and presented a driverless electric shuttle (they were present at UITP Summit 2019 as well). The news was announced by Iveco in late June 2019.

Iveco Bus is equipping its prototype with electronic components and sensors. EasyMile, a world leader in intelligent mobility solutions, is providing its technology as well as its experience in platform integration, deployment and autonomous vehicle fleet management. 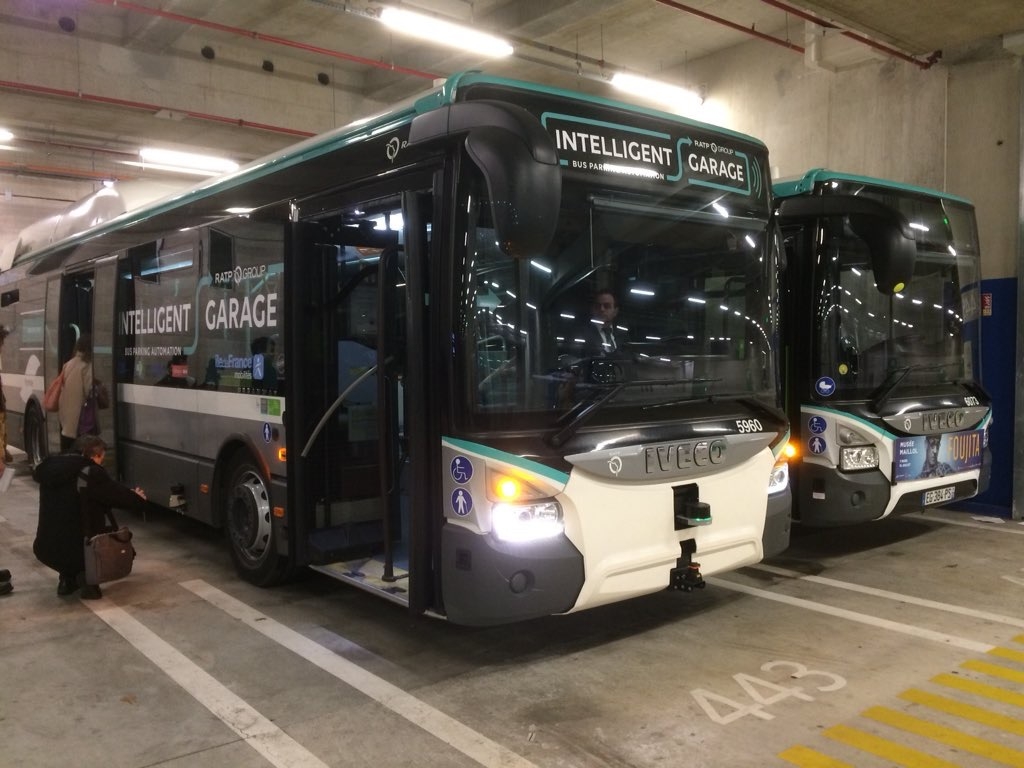 To date, the experience of Iveco Bus in autonomous bus operations was already proved by the smart depot’ pilot held in Paris in spring 2018 with an Iveco Urbanway. The principle is that buses, equipped with sensors, park themselves in the depot, without human involvement. This offers the advantage of a quicker manoeuvre, saving time and space: the vehicle drives itself, optimising the space available, on entering and exiting the depot. Refuelling and washing can also be carried out in full autonomy.

Dutch telematics company ViriCiti announces it has partnered with Gillig, one of the largest bus manufacturers in North America. The collaboration means GILLIG’s electric bus telematics are now powered by ViriCiti fleet management platform. Recently, in Europe, ViriCiti has signed a 7-years agreemen...
The Luxembourg passenger transport and tourism company Voyages Emile Weber (VEW) has awarded the PSI subsidiary Moveo Software GmbH (subsidiary of PSI) with the delivery of the personnel dispatching system Moveo Profahr as well as the integrated depot and charging management system PSIebus. VEW has ...
The Dutch e-bus producer Ebusco and the telematics company ViriCiti announce they have formalized a 7-year partnership. Therefore, Ebusco will continue to use ViriCiti’s fleet management service to power its Ebusco Live monitoring system, pre-installed in all Ebusco buses. The two Dutch companies ha...
Mobileye is partnering with Transdev Autonomous Transport System (ATS) and Lohr Group in a project addressed at developing and deploying autonomous shuttles. The companies are integrating Mobileye’s self-driving system into the i-Cristal electric shuttle, manufactured by Lohr Group, with plans to in...